Insights from user reviews on PeerSpot

Good software testing stands or falls on having the right test data. This is one of those obvious facts about software testing that nonetheless tends to be a big challenge for many testing teams. Test data management tools offer a solution. They enable the provisioning (and if needed the anonymization) of data used in testing. In this article, real DATPROF users on PeerSpot offer insights into the benefits of using a test data management tool.

DATPROF users put their test data management tool to work in a variety of use cases. For example, Arjan S., a Test Manager at CGI Inc, a consultancy, is responsible for protecting his company’s data. He described his use of DATPROF by saying, “Higher management demanded testing to be done with masked data.” Data masking is often required for privacy and compliance purposes. Arjan S. and his team had been testing with what was available in-house but, as he put, “with homemade tooling it wasn’t possible.”

Another real challenge came from “subsetting test data from/to databases with an incomplete relational model.” Subsetting is the process of extracting a smaller sized set of data from a production database, with references intact, to a non-production environment, such as a testing system. With DATPROF they were able to integrate into what existed to solve the issues.

Finding more disk space by means of subsets was a primary requirement for Erik W., a Business Information Analyst at an insurance company. His team uses a standard software solution with some custom adjustments on an IBM DB2 LUW database. DATPROF’s software offered an alternative to a test database where they had previously used a production copy that required 23 TB of disk space. The disk space has now been reduced to only 130 GB. The successful outcome is significant, with Erik W. commenting, “We therefore only use 0.5% of the original amount of disk space.”

Anonymization, also essential for compliance, security and privacy, is top of mind for a staffer at a government department. They’ve adopted DATPROF Privacy and DATPROF Runtime to mask sensitive test and development data on Oracle, Microsoft SQL Server, MySQL and Postgres databases. He remarked, “As compliance is essential, the automated technology from DATPROF is the solution for GDPR (General Data Protection Regulation) and for protecting sensitive business information.”

The ability to refresh test data frequently is seen as a major benefit of test data management tools. Different data sets test software in different ways, so it’s advantageous to have multiple data sets to put into testing processes. According to Prakash P., an SAP Platform Architect at a manufacturing company, DATPROF, “enables us to refresh test data frequently and developers don’t see personally identifiable data, only scrambled data.”

For non-SAP applications, Prakash P. and his team, “did not have the ability to scramble or mask data.” He said, “Doing so was only a dream. Production users, even developers, were usually able to see personally identifiable data in test environments because they have super-user access. But now we don’t have that situation anymore. Anybody who logs in to test data only sees scrambled data. They don’t see the real data.”

Previously, they had to be mindful not to copy production data into the test system because there was no way to protect the information. “Today,” Prakash P. said, “because we have a scrambling solution, we are able to do refreshes frequently.”

Getting better at audits

“Before we had the solution, when an audit was done for non-SAP applications, there were always red flags,” said Manoranjan M., a Product Owner at Heineken, the beverage maker. His team did not have the critical tools to protect company data. It was difficult to get buy-in from management and all other departments involved in making decisions until the DATPROF system was proposed. He added, “Once we found DATPROF, the red flag issue was eliminated. Audit-wise, we are now compliant.”

A test data management tool can help simplify and streamline test processes. For instance, being about to utilize test data across applications for more than one customer is very helpful, according to Prakash P. He shared, “I have not seen any other solution that makes it easier for scrambling between SAP and non-SAP applications. This is definitely important. Our testers would go crazy if the data in our SAP application and our non-SAP applications looked different.”

He elaborated, saying, “We were using it for Microsoft Dynamics Navision and at a later point in time we had to use it for JD Edwards, but we didn’t have to go to any other solution. We were able to quickly port a JD Edwards application into the DATPROF solution and we were able to scramble the data in that application. It’s a single tool that helps us to do that across applications.” 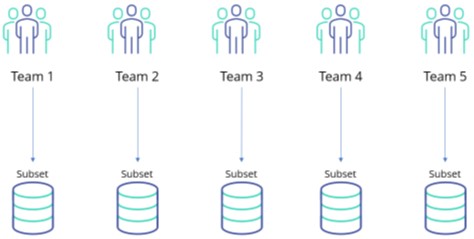 For Arjan S., DATPROF simplifies testing through subsetting, templates that are easy to maintain. Erik W. also acknowledged the value of subsetting and anonymization in making his testing process go better. He added, “It is able to generate a model of the database even when our supplier did not want to release the data model. The tooling provides additional insight into how our package works. I also think the possibility to generate synthetic test data through functions is a nice addition since the start of our collaboration.”

Reusable templates have helped Prakash P. conduct testing for Microsoft Dynamics Navision in more than 19 operating companies within his business. For him, DATPROF eliminates wasting valuable time customizing for different testing situations. He shared, “But if we have one template that can be reused, it becomes fairly simple for us to quickly adapt it. Once you configure it, it becomes a routine. You just press the button.”

For some DATPROF users, what matters is better test analytics. As the tech company Test Consultant put it, “The data model intelligence provided by DATPROF gave us a head start in analyzing the needed test data. With basic database knowledge, we were able to create database templates that will filter out the required test data.” He added that the DATPROF data modeling software, “gave additional insights for debugging in the case of circular foreign keys.”

Software testing is not a simple or stress-free workload. With test data management, however, the process does become a bit easier. Issue with privacy and compliance are more manageable. Audits get easier. The process becomes streamlined with reusable templates and disk space is saved thanks to subsetting capabilities. As these factors come together with DATPROF, users become more efficient and achieve better testing outcomes.

Get in touch with our experts